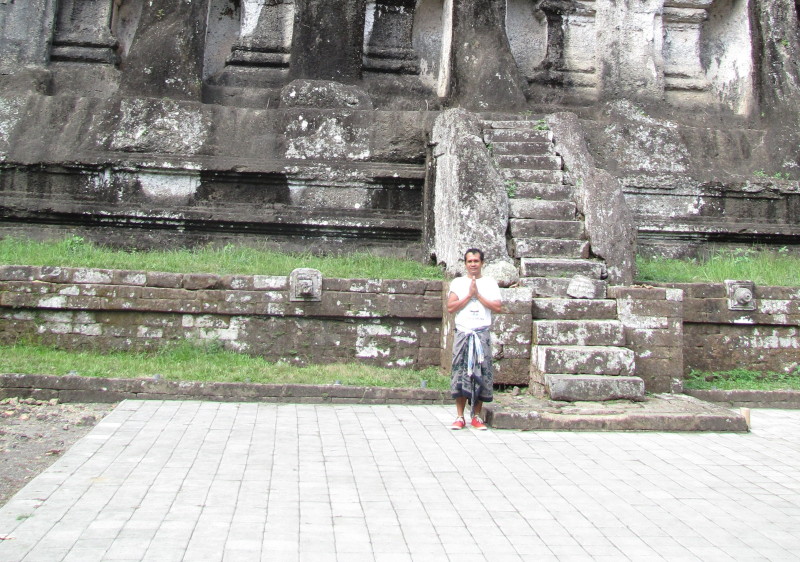 I walked over to him and he greeted me, “Okay, Rachel!” He smiled, “Ready to go?”

We strolled out of the glinting lobby and into the hot Bali sun.  Black cars with tinted windows were lined up in neat rows next to the resort gardens.  Flowers stood at attention in lines as straight and uniform as the cars.  The lawns were smooth and soft like fur, too green to for that heat. Putu skipped ahead, glancing back at me shyly. Wayan said, ”Mine is just a simple car!”

I had only exchanged a few emails with Wayan before he picked me up to come stay with his family for three days in central Bali.  My cousin Brendan, a film producer, surfer, and one of my favorite people in the world, had put me in touch.  ”Rachel,” Brendan had said when I told him I was going to Bali, “you have to extend your trip for a few days and stay with my friend Wayan. Really. He will show you real Bali.”

My full correspondence with Wayan consisted of a few emails and a call the day before he picked me up when we set to meet at my hotel in Nusa Dua at 4:00 pm.  A few hours before the pick up time, as I lay on a luxurious massage table in the hotel, I realized I didn’t know Wayan’s last name…or where he lived, or what he did for a living, or what other members of his family would be at the house where I would stay.  But I trusted Brendan, and even though it had been two years since my big hitchhiking adventure across China, winging it in a random country in Asia felt comfortingly familiar.  Plus, I liked Wayan already from his short, charming emails.

Should I pick you up from Airport.
And where would you stay.
In Ubud or somewhere in Bali.
My house is open for you to stay.
But Just simple house.

Wayan, Putu, and I walked toward the car.  I had been afraid that it would be difficult to communicate with Wayan, but his English was superb.

“Your work brought you here, Rachel!?” He added my name to the ends of his sentences like an exclamation point.

“Yes,” I said, “it’s very lucky”  I thought of my massage and the furry grass and felt guilty for all this excess. I added, “I couldn’t have come if they didn’t send me here.”

“You must have a very good job!” Wayan said, apparently delighted.  My guilt eased slightly.  ”Do your parents know about your job?” he asked.

Putu skipped around the car.  ”Putu is very excited, Rachel!”  Wayan’s voice was jolly. “She has never been to Nusa Dua before.”

Wayan’s car is a ’76 Toyota with a white stripe that down the right side of the hood.  It has a Harley Davidson sticker center top of the back windshield and another one below it that says Benneton in multi-colored letters.  It is boxy and rattly and has windows that roll up and down with cranks, old and slippery so that they fell clunk into the doors when I tried to crank them up.  Putu took the front seat and I the back.  There were no seat belts in the whole car.  I remembered getting into trucks in China and checking for seat belts, one American habit that I would not give up.  But this time I had no choice.

“We will be there in about two hours, Rachel!”

What?! Two hours? He had driven two hours to pick me up!  My guilt roared.

“I’m so sorry! Oh no, I had no idea it was so far!”  Then I remembered how I had called him around 3:00 to ask if he could come at 4:30 instead of 4:00 as we had originally planned.  ”No problem, Rachel!” he had said, “more time to enjoy the ride!”  I hadn’t understood that he was already on his way.   I apologized again and again for his long drive.  ”No problem, Rachel!” he repeated, “No problem. This is my job!”

Consider driving two hours to pick up your friend’s cousin who you are hosting for free in your guest bedroom, which you usually rent out for money.  That is a beautiful thing.  I felt so guilty for that two hour drive, but I determined also not to let that overshadow the significance of this act, bursting with mutual trust and curiosity, actually a perfect beginning for a weekend of discovery.  Why would Wayan host me like this, spending all this time on me, and for free?  For that matter, why would I go stay somewhere completely unknown, subjecting myself to a lot of uncomfortable moments like this whole thing with the ride and the nice hotel and the guilt? Because we believe it will be a positive experience to meet and share experiences and exchange perspectives.  Because we like how that feels.  Because we think something can grow from it.