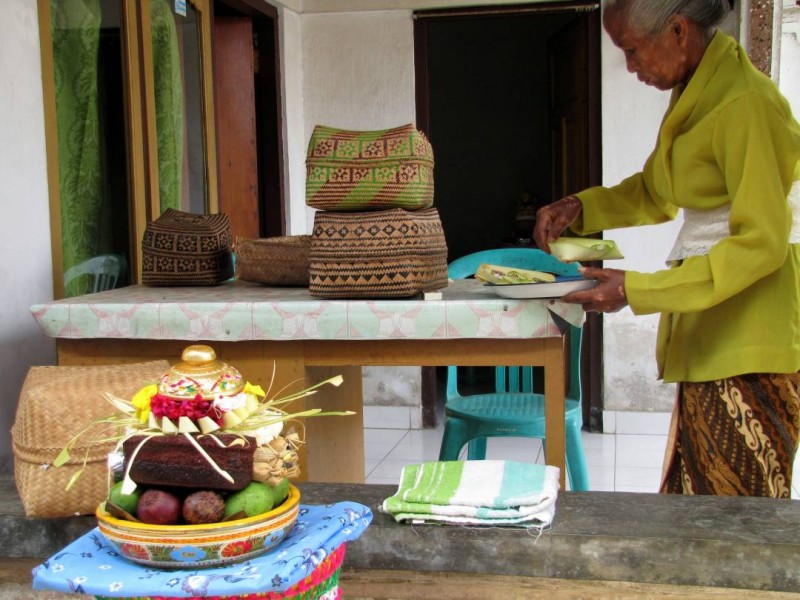 Wayan’s house is centered around a simple but beautifully curated courtyard surrounded by a few rooms and an area for four ancestral shrines.  The courtyard is filled with lush trees and potted plants, tended by Wayan, who told me each one by name with a familial affection.  The shrines take up a full quarter of the property; huge stone blocks piled twice my height, draped with flowers and leaves folded into different ornate shapes.  The main house has three rooms made of thin walls and plastic floors.  The guest room is a separate room, dark and square, with a mattress on the floor and a little bathroom off the back.  The bathroom has a squatting toilet, like in China, and a little spigot for a shower which had no hot water. It has a floor of grey pebbles and a little potted plant in one corner which I thought looked charming.  His whole house seemed to me to be the real version of that stone-and-water aesthetic of luxury hotels that are trying to look ecological.

That first morning, Wayan woke up at 4 to drive his wife to the market to buy goods for the little store they kept at the front of their house.  By the time I got up at 6:30, Wayan’s wife had already returned and cooked up a classic Indonesian breakfast of meat and rice wrapped in brown paper.  The family - Wayan, Wayan’s wife, his older daughter Putu who was nine, and his younger daughter Kadek who was three - sat around a mat on the ground and unwrapped the brown paper and scooped out the greasy contents with our hands. I watched Putu pour the greasy rice from her palm into her mouth and tried to imitate.  She smiled at me, modeling the correct way to eat.  Wayan’s wife ate slightly  after the rest of us, sitting a bit back from the mat.  Only Wayan spoke English, so my communication with the family was limited, but everyone ate with a smile on their faces.

The week I was there was a festival week, so the two girls did not have school.  Wayan’s house sat on a narrow, bumpy dirt road which was decorated with huge bamboo offerings for the festival.  Bamboo stalks lined the road, many stories tall and decorated with ornate fans of flowers and banana leaves.  They had lng, decorative ropes of leaves hanging from the top which swung down to the ground.  There must have been at least a dozen on Wayan’s tiny street alone.  He told me that they are made by young men for the festival, and each one take a full day and a half of a man’s time to make.

After we had finished eating, Wayan’s niece showed up skipping, “Hello!” she said in English, “I’m Wayan!” It turns out that in Bali all of the first children are names Wayan or Putu, neither of which is gender specific.  All second children are named Kadek, and so on until the fourth child, and the fifth child is again named Wayan.  I could not believe this, and was absolutely blown away by the conversations i had with Wayan through the weekend, where he would refer to “his friend Wayan,” when I had met so many friends named Wayan.

During breakfast, Wayan’s mother, Wayan, came out to the courtyard and sat in a nook at the back of the courtyard looking on with a gentle smile.  In front of her on a broad thick table was a straw basket filled with strips of bamboo leaves that had been pre-cut.  She methodically picked up the strips and folded and stapled them into little fans.  While we ate and talked, Putu sat down at the eating mat and ripped a long banana leaf into equal strips a few inches wide.  After she had the strips prepared, she hopped up and came back with scissors to cut the strips into four-inch squares.  Her hands moved quickly and easily across the leaves, briskly stripping away frayed fibers, nimble hands like a worker on an assembly line.  I watched on, not knowing what she was doing or why.  The scissors and the stapler seemed too plastic and metal, jarring amidst the leaves and flowers.

Soon Wayan (cousin) and Putu skipped to the kitchen and picked up three plastic bags full of flowers, one red, one pink, one orange, and one yellow.  Putu pulled from a large basket twenty or thirty small trays the size of coasters, with a base and shallow walls made of banana leaves that had been stapled together.  She laid them out on the big table and counted and re-counted the horizontal and vertical rows, murmering multiplication tables.  Like the staplers, the multiplication seemed somehow unfit for this ritual, a hard, metalic kind of thing that was strange coming out in the flickering, purring Indonesian language with regards to an array of offerings to a dragon god.  Just not the context when I think of the fact that multiplication would be useful, as if I naturally find acts of religion and acts of intellect to be incongruous. 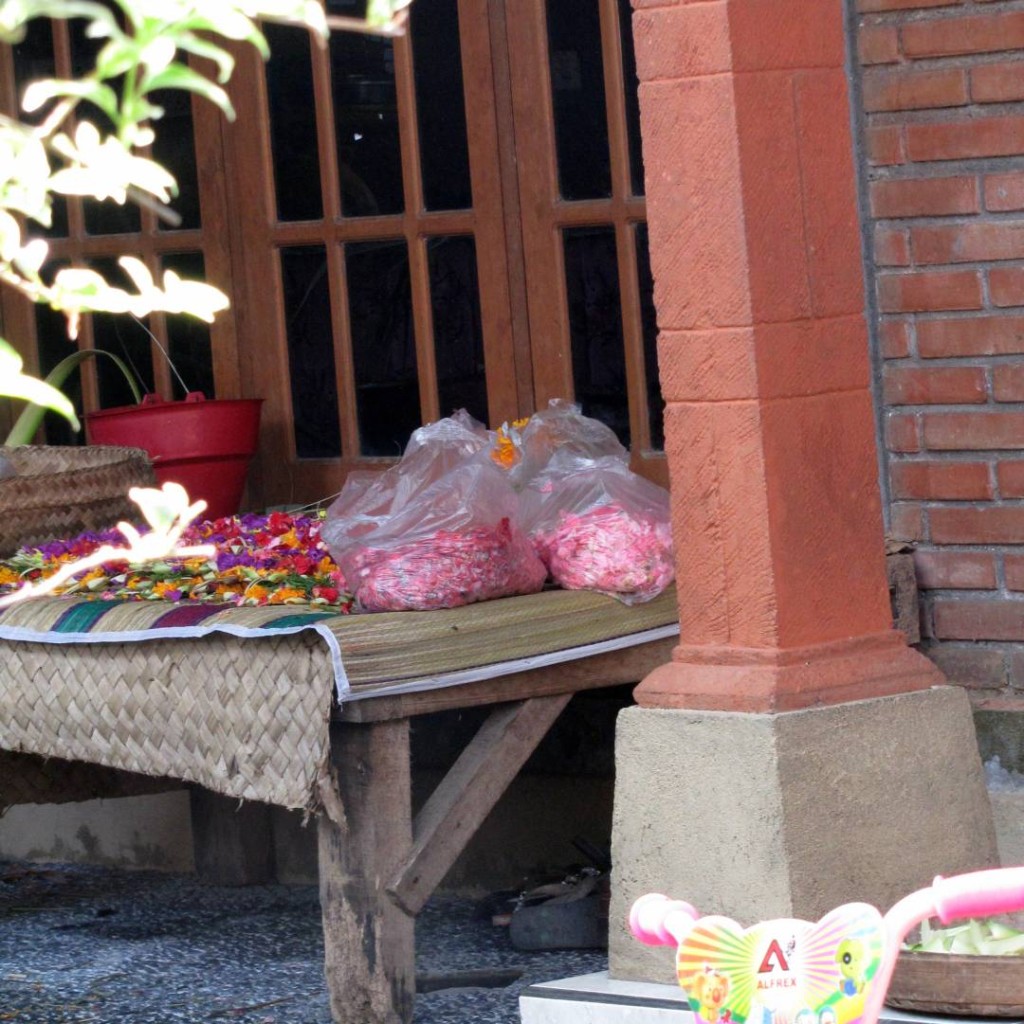 For the following half hour, Putu and cousin Wayan went about preparing about three dozen offering trays.  They stood in front of the table and distributed plants and flowers across the three dozen trays.  First Putu laid down one of the square banana leaves that she had just cut up in the base of the tray, and Wayan followed quickly with a clump of red flower petals, which she ripped off a handfull of flowers that she had grabbed from the plastic bag.  The air was still and the morning just starting to heat up, and the girls sang off tune in Bahasa Indonesian as they worked.  When they disagreed on the lyrics, they stopped and repeated them slowly together, then broke into giggles when they said different words.  Their bodies wiggled around with young excitement as they sang.

Wayan and Putu continued to pile on the ingredients.  After the red flower came the pink flowers, the orange flowers, the yellow flowers.  they brought a big clump of some grass-like plant and dunked it in water and squeezed it out into a bucket and drizzled oil on it from a plastic container like a mustard squeezer, and then they distributed across the trays on top of the flowers.  Every so often grandma Wayan came over to check the progress, smiling and answering questions from the girls.  Maybe it was because I didn’t know what they were doing or why, but the courtyard took on a distinctly mystical feeling. Incense and the sweet small of ripped flower petals flavoring the air, the soft singing, and the feeling of nowhere to be.

Just when it seemed like the pile of fauna on each tray was complete and all the ingredients on the table had been used, Wayan (cousin) started pulling ornate flowery fans of banana leaves out of the wicker basket on the table.  Each of these creations was a few inches wide and intricate with multiple banana leaves folded and stapled just-so.  I watched in slight disbelief as Wayan pulled out another three dozen of these and put them on top of each existing pile on top of each tray in the big square on the table.  Then the two girls proceeded to repeat the whole process on this new floor of the offering tower, moving through all the colors of flowers, and the grass, and on and on. 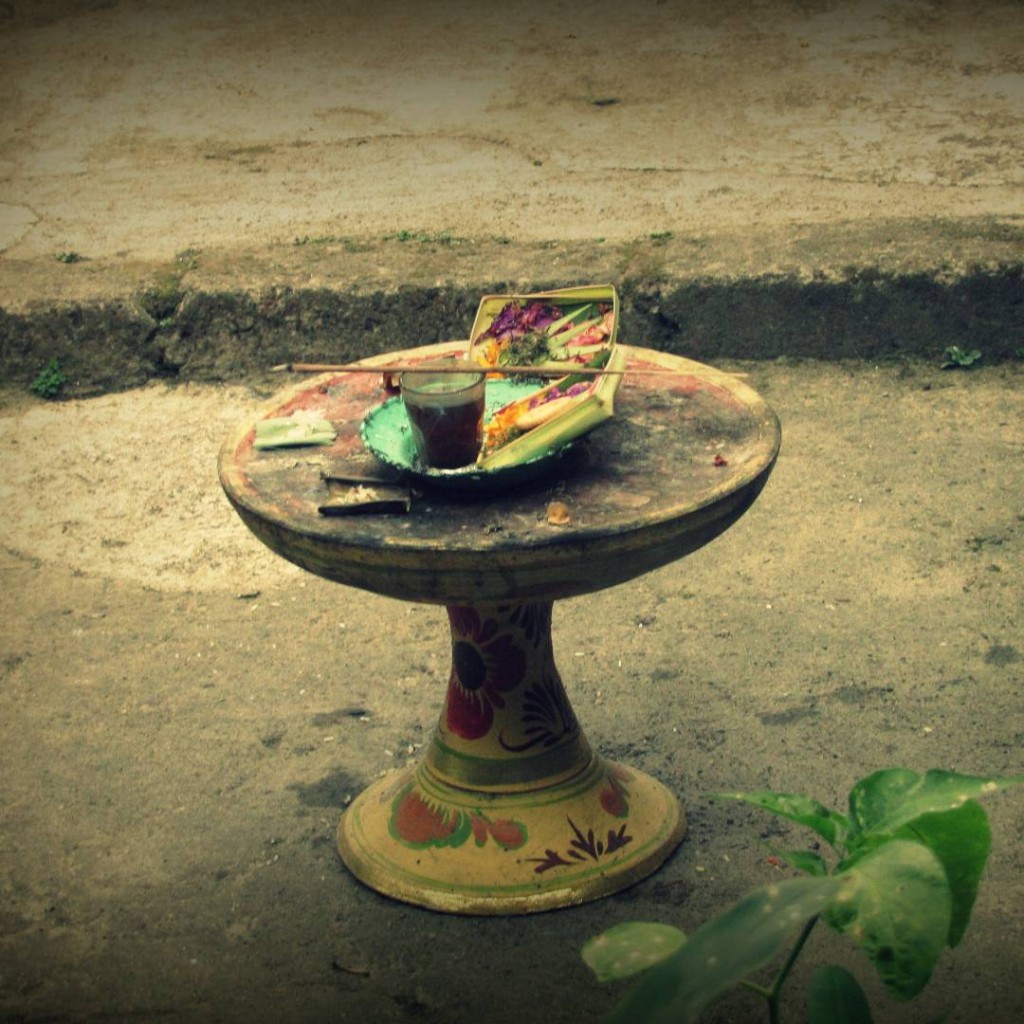 I was entranced with the beauty of this process and simultaneously skeptical.  I also spent a good chink of time disliking myself for that skepticism.  What a beautiful thing, to have this act that a family does together every day, where everyone is in a room together for 45 minutes making something that is beautfiul and meaningful to them.  But also, whoa this took a long time!  And I could only imagine how long each of the trays took to make beforehand, and then there was the flower fans – oh my god!  And multiply that by every household.  Isn’t there a better use of human capital?  But no, no! Stop! I thought.  This here, this is exactly what my life is missing! What is missing from the lives of so many people I know!  Something that brings the family together, centers it in a time and a place every day, connects it with the other families on the street who are all doing the same.  My mind raced with the competing arguments.  Beautiful or a waste of time?

Wayan (father) watched me watch.  He had been extrememly responsive to my questions about Indonesian culture, and seemed to understand the types of things I might wonder about.  He was practiced at this – Wayan worked as a tour guide during the week and spent a lot of time with foreigners. He sat serenely next to the eating mat leaning against a bare wooden post that held up the roof of the open eating area.

“But I do want to find some book about this.  Because this generation, they want to know what for.  They ask questions.  Even Putu asks questions. What for?”   We sat close together on the floor of the porch and Wayan dangled his leg off the edge and thought.

“My generation, we just do.  tell us to do, and Ok! But now we are open, globalization, want to know what for.” He scratched behind his head. “So I want to find some books, so I can be able to explain them these things.  Why this, why that, what for.”