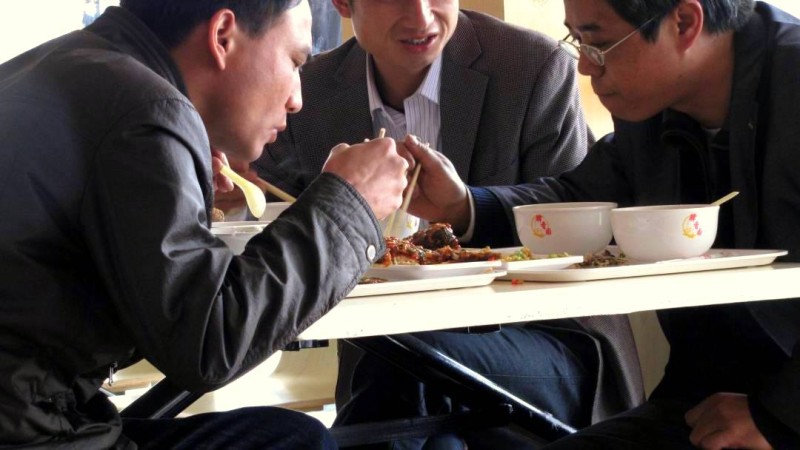 I’m setting off again today, heading out for my last cross-China trip.  I will accompany Driver Zhang from Chengdu to Shanghai, and then go home with him to his hometown in Anhui Province.  In typical China fashion, the trip was planned yesterday and will last an undecided amount of time.  I woke up at 5:30 am today to catch a bus to meet Zhang in Luxian, a town in southern Sichuan, only to find that we won’t be leaving until tomorrow.  Manman lai.

Today is Duanwu jie, the Dragon Boat Festival, a national holiday in China.  It is a traditional holiday, rather than a political holiday instituted by the CCP.  It celebrates an ancient poet from the Zhou dynasty who, after being exiled for treason, committed suicide by jumping into a river.  His body was saved from being eaten when onlookers threw rice into the water to distract the hungry fish and paddled out into the river to scare them away.  To commemorate his death, people eat sticky rice wrapped in bamboo, zongzi, and hold boat races.

I arrived in Luxian at lunch time to find Zhang, Li, and six other men from their hometown finishing up a big meal in the back room of a local restaurant.  Zhang had made me rush to get there by lunchtime, I think in order to celebrate the Dragon Boat Festival over lunch, but I had arrived late.  He still made a point to order me a zongzi, telling the waitress to “please get our foreign friend a special zongzi!”

The rest of the day has been spent watching TV in Zhang and Li’s room, all the men piled in there filling the beds and chairs.  It’s a clean, spacious room, very comfortable compared to our last accommodations.

About an hour after lunch a tiny little man with bulging, surprised eyes walked into the room, and everyone’s attention turned away from the TV and toward him.  One driver hopped up out of a chair to give it to the man, and Zhang offered him the tea that he had just brewed for himself.  The man accepted both.  He spread out his skinny legs and leaned back in the chair, taking up far more space in the room than his little body merited.  He looked around the room.

“This is nice!” he exclaimed, “how much are you paying!?”

“Well!” the man replied, “you guys are wasting money!  Just leave right after you load your truck!”

The man’s name was Wu Zhang, and he worked for a local logistics company.  He asked what I am studying, and when I said logistics, he leaned back further in his chair and started talking quickly.  He listed his credentials and name dropped logistics companies where he had worked or had friends, few of which I had heard of.

“I am an wuliushi” he told me: a Logistics Master.  The drivers chuckled.

Wu told me he had worked for Suning doing distribution.  Suning is a large electronics company in China.  It hires contracted drivers for long shipments, but does distribution internally, like many large companies.

“It’s one of China’s best!” Wu told me, “like your Walmart!” He suggested I seek an internship there.

“Oh, there you would learn a lot.  A very good position.” He scrunched up his face like he had just sipped deliciously sour lemonade, “very good position,” he repeated.  He then told me that if I stay in Chengdu, he could introduce me to dozens of friends who want to learn English.

“During the day you can do logistics, in the evening you can do a little teaching.” Lemonade face. “That’s too good!”

Wu was self-consciously cocky.  His income is likely many times that of the drivers with whom he was speaking, and he held authority over the packed hotel room by virtue of both his economic status and his powerful position in the current load transaction.  But he reached out to me with enthusiasm of an over-eager networker in a way that drivers rarely do, showing me all his cards right away.  Before he left, he issued a string of unsolicited career advice, and insisted on leaving me with his contact information.

Wu led Zhang and another driver out to organize the load.  Li and a fourth driver eventually sank into the covers of the two twin beds and fell asleep while the TV blasted a talent show where a boy was jumping up a flight of stairs on only his head.  The crowd screamed “JIA YOU!!”: literally “add oil”, the Chinese expression for “go!” or “come on, you’ve got it!”  No one was really watching anymore, but still the TV stayed on.

I have retreated now to my room for some reading and writing time, and will head back down for dinner.  I’m glad to get a good night’s sleep before we head out tomorrow (hopefully) – I imagine it will be at least four days of truck time before we get to Zhang’s hometown.  This last one’s really going to be a Long Haul.