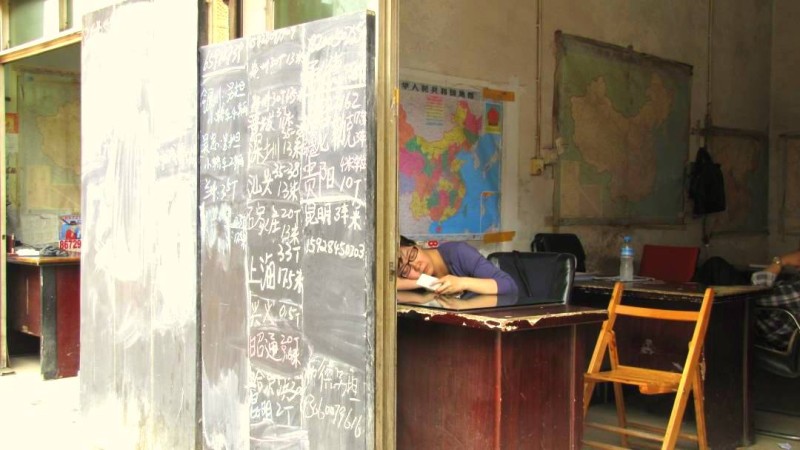 Today I went back to the Chuanshan Freight Market.  The waiter who served me lunch at one of the little restaurants in the market turned out to be very knowledgeable about the way the place worked and interested in telling me about it. After I had eaten, he sat down and explained how Chuanshan runs. Here it is, in all its convoluted glory:

The Freight Market is made up of long rows of small intermediary companies (xinxibu).  These intermediaries establish relationships with factories in the area through social networks and by sending representatives to prospective factories. The waiter told me that in the past factory representatives would come to Chuanshan seeking out intermediaries, but now there are too many intermediaries and not enough shipments so the situation has reversed.

In order to establish a formal relationship between the factory and the intermediary, the intermediary must pay a deposit of a few hundred thousand RMB to the factory. This deposit insures any lost goods that result from shipments set up by the intermediary, and represents one of the primary functions of these intermediary companies. The reason that factories work through intermediaries is that they act as insurers as well; they are responsible for paying in full for any goods lost by the truckers to whom they contract loads.

“In China,” the waiter said, “factories don’t dare contract directly with drivers. You’re a driver, I don’t know you, I’m afraid you’ll run away with my goods.” Later however, he told me that there are many situations in which drivers build a relationship with factories and then bypass the intermediaries. Whether you are a trucker, a factory, or an intermediary, networks of trust are the most important asset in this industry.

Once the deposit is paid, the intermediary is granted access to a factory website which announces the goods it wants to ship. Each factory’s website is accessed by a number of different intermediary companies who bid on each shipment. The factory then chooses the lowest bidder, and contracts the load to that intermediary.

That intermediary in turn writes the shipment information up on his chalk board at Chuanshan. Interested truckers bid for the load, without knowing how much the shipper is paying the intermediary. The intermediary chooses the lowest bidder and keeps the difference between the truckers’ bid and their own bid to the company, as well as a 100-200 RMB fee paid to them by the truckers. I had wondered why intermediaries seemed to negotiate so fiercely on behalf of the shippers.

The waiter summarized the situation for me:

“It’s very simple. In the US when two people get married, they court each other directly. Here there’s someone in the middle setting the two people up. It’s the same with trucking.”

But the playful metaphor didn’t do the system justice, and he added, “The money that the factories give the intermediaries is enough. Definitely enough,” the waiter told me, “It’s the money given to the drivers that’s not enough.”

Here’s a visual of the system:

I asked him about Chuanhua, and he immediately told me not to even bother going there. “It’s not good over there.” I asked him what the difference was, and he told me that Chuanhua is a private company and Chuanshan is run by the government. I asked him why that mattered.

“It doesn’t”, he told me, “it’s just all the drivers know this place. Chuanhua is new. Pretty much every driver knows Chuanshan. They love getting goods here.” He continued,

“Most people here are peasants. They don’t want to look at that electronic screen! It goes to fast! Their eyes aren’t good!”

Most of the drivers coming to Chuanshan aren’t locals, they drive between Chengdu and their hometown. Chengdu is a pretty popular “point B” for people from all over the country, because of the availability of goods and the infrastructure, like Chuanshan, for connecting with factories. But now it has gotten too popular, and most drivers that come here lose money or break even on the return trip because there are too many drivers in Chengdu competing for loads. In the other direction, the waiter told me, business is fine.

“Back in their hometowns there are fewer trucks. Each hauls the goods from his own place. But here there are too many.”

The profits are also seasonal. Sichuan exports a lot of fresh food products to the north during the colder months when things can’t grow up there. Sichuan also produces a lot of baijiu, Chinese rice alcohol, which the Chinese say is “warming” and is therefore more of a winter drink. In the summer, people switch to beer. The profits of truckers coming to Chengdu fluctuate with these trends.

The Chuanshan Freight Market is a gift and a curse to drivers. It’s a gift because drivers could not operate without this kind of data collection center. Such centers facilitate matching between loads and trucks and attract drivers to Chengdu. At the same time, the structure of Chuanshan and the competitive landscape places the negotiating power in the hands of the intermediaries. Their privileged networks and secret in price negotiations with factories allow them to squeeze the juice out of the market and leave the drivers pretty much dry. One important purpose that they do serve is to provide a type of makeshift insurance to the factories. However, unlike regular insurance agencies which charge based on coverage requirements, these “insurers” take their cut based on the difference between the factories’ willingness to pay and the market price in the extremely competitive market for loads.

There is an understandably bitter sentiment toward these intermediaries among drivers. They know that they are getting screwed. So why don’t they become intermediaries? It seems that a driver would be able to build up the necessary network pretty easily, and would obviously be better off as an intermediary. The waiter told me that he thought about 20-30% of the intermediaries at Chuanshan are ex-drivers.  The number is limited because many of the drivers aren’t locals, so they don’t know the area and it can be hard for them to build trusting relationships in the area or acquire the skills needed to go looking for data. Like he said before, many of them are peasants. An entrepreneurial venture requiring computer and business skills isn’t so simple, even if it seems they have the resources on hand.