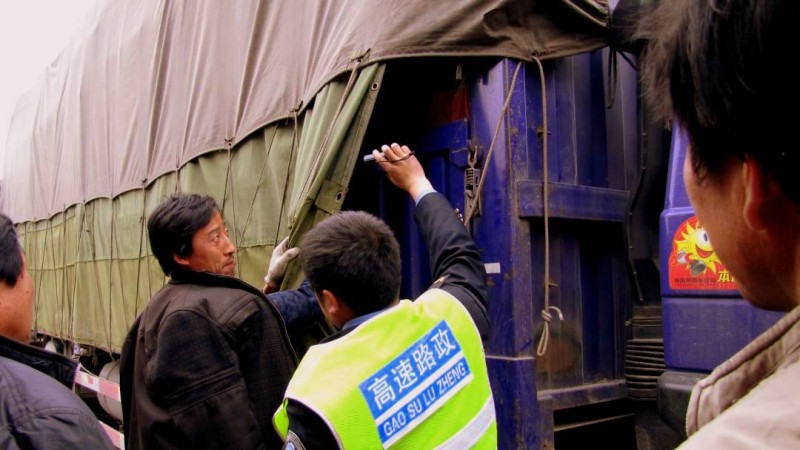 Chengdu is preparing to implement a new law governing truck distribution within the city limits, a pilot program that the government hopes can be imitated in other provinces as well. Currently, in order to drive within the city’s third ring road trucks must have a license purchased yearly from the Traffic Police Department (or pay illegal dailu guides to use theirs on a per-use basis). The city is rethinking this, because a) having the drivers pay the Traffic Police Department for these licenses only helps the Traffic Police Department and no one else, and b) the Traffic Police are technically limited to issuing a certain number of licenses per year, but in reality have the discretion to issue as many as they want, which they do, causing excessive congestion. The new system will require drivers to apply for the city driving license. The applications will be reviewed based on a set of requirements: the driver must have a good driving record, the truck must be equipped with GPS, and the company must have a warehouse near the city. The performance of each truck will be reviewed each year before the city renews the license.

It sounds like a big improvement, and it will be in many respects. But the new law completely excludes owner-operator drivers, who rarely have GPS and have no hope of owning a warehouse near the city. One industry professional told me simply that the city can’t manage these drivers effectively, so of course they can’t be incorporated into the new streamlined system. He told me the city wants those drivers to join companies. I asked what policies are in the works to encourage them to do so and he told me,

This is a good example of how the industry has and will continue to develop: top-down policies which effectively work to streamline the operations of the small segment of trucking done by large, well organized companies. The professional I spoked with showed me a series of drawings of the new city license, a bumper sticker with a cute panda logo, pasted on FedEx and DHL trucks. The policies ignore the owner-operator segment, which this industry professional estimated accounts for 60% of trucking in central and western China (less on the coast). Despite their dominance, it seems the owner operators will continue to be squeezed until they can be incorporated into the part of the system that is recognized as “workable” by policy makers and industry professionals. For now, policy makers have thrown up their hands and decided to wait it out.